It’s ALL about Pavlov… 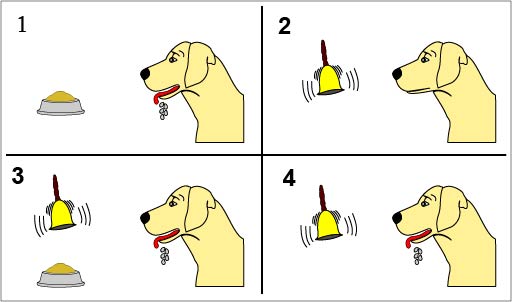 It occurs to me that I should do a post on the most basic building block about why the Many Hats Model works:
Humans–along with all other life on the planet–are pavlovian creatures.

That statement elicits a variety of responses:
“What about free will?”
“I’ve known that for decades!”
“What does this have to do with the Many Hats thing?”
“Oh, man. Totally!”
and, of course,
“What does ‘pavlovian’ mean?!?”

A few years on both sides of 1900 a Russian scientist named Ivan Pavlov was doing some interesting experiments on the digestive systems of dogs. He noticed something wacky: the dogs (which he took very good care of, BTW) would salivate whenever the assistant that fed the dogs entered the room…even when the assistant didn’t bring food.

I assume that Ivan assumed the dogs didn’t plan on eating the assistant, so what was up?

Pavlov and the Famous Bell Experiment

Ivan knew he’d found something very interesting and created an experiment around it. He knew stuff the dogs would recognize as food would automatically (that’s a key concept here) trigger a hunger response from the dogs, resulting in salivation. The dogs didn’t need to think about what the food represented. Their bodies just responded.

He then compared this to how the dogs responded to a bell ringing (or a metronome in another telling–but the bell version is the famous example), which, aside from maybe looking at what made the noise, they otherwise didn’t respond. A meaningless stimulus like this became known as the “neutral stimulus”.

Ivan then paired the neutral stimulus with the automatic stimulus. That is, he rang the bell (or set the metronome) whenever he had the dogs fed. After some number of meals went by he would ring the bell WITHOUT feeding the dogs. And guess what?

They salivated.
They were anticipating food.

Why I Haven’t Gone to My High School Reunions
(or, Why Your Siblings Still Drive You Nuts)

Pavlov had discovered the “conditioned response”. This is where a stimulus, especially one that has little or no instinctive reaction (automatic response) assigned to it by your brain, is assigned a response by your brain through association with an automatic stimulus.

For example, if your mom rings a bell every time she calls you to dinner, eventually you’ll get hungry whenever you hear a bell.

I don’t hate to break it to you, but we’re all just a bundle of automatic and conditioned responses. (We still have free will, though. I’ll touch on that later.)

This is why I haven’t yet attended any high school reunions. (Go Bulldogs!) I love my hometown. I love my old high school. But I don’t really like who I was back then. (Okay. I overstate. It’s really the 6th through 9th grade me that I don’t want to behave like…)

To explain this, let me ask those of you with siblings who drive you nuts: Why do you still drive each other nuts?
You’re adults now. (Possibly for many decades.) Shouldn’t you both have grown up and gotten over yourselves?

You both/all have indeed grown up. It’s just that you have deeply rooted associations for responding to each other. As much as you intellectually want or know how to behave differently toward each other, your wiring just won’t let it happen.

By the way, stop blaming your sibling. I brought this up with a business networking friend and she said, “She just won’t let stuff go,” to which I responded, “I guarantee she’s saying the same thing about you.” (Or something like that. 😉  )
It takes two to tango….

Which leads to the above section title. Yeah, you read it right. In addition to motivation, fear doesn’t work and willpower doesn’t work. Not consistently.

Most “motivational” self-help or performance training deals with, well, motivation. Yee haw. I’m pumped up now. Until I go back out to where I’m needing to perform.

Okay, I admit it. This is a marketing-y overstatement, but I stand by it. Although for some people a little extra motivation is all that’s needed to excel, for most of us motivation is a one-trick pony. At best, it works maybe once and only improves our performance just a bit. At worst, the moment we’re plopped back into our regular lives, our existing conditioned and automatic responses take over immediately.

It’s the same with fear. If you have been doing something a particular way for a long time without NOTICEABLY and TRAUMATIC ill effects, you’ll have a hard time changing that behavior. Think about the difficulties many people have not texting while driving. Are you old enough to remember the throngs of people who kept smoking even though they knew it would kill them?

If so many people have the motivation to diet (“I want to look great and feel great for me and be healthy and live a long life for my loved ones”) and the fear of not eating well (“I don’t want to be sick and get all sorts of diseases and be miserable and die early”) and plan on using willpower (“I won’t let myself eat bad food or skip exercising”), then why do so many people fail diets?

I don’t trust the “95% of diets fail” claims, but I also know anecdotally a great many serial-self-helpers–people who keep taking motivational and leadership courses–with little change in their lives after a few days back in the real world. I can’t imagine the success rate of motivational programs is any greater than that of diets.

This is where stuff gets real. Back to the diet example, and then to how this affects your work life…

Imagine grandma always gave you cookies. Between your sweet tooth and associations to grandma (who you adore/d) and that your parents always gave you something sweet for snacks, if you’re at home alone and need a snack, are you grabbing the cookie or a floret of broccoli?

What if you’re a little upset or had a challenging day or a triumphant day or a good workout? What will one cookie hurt?

That cookie wasn’t very large. The damage, diet-wise, is done, and you’re sure your workout burned enough calories (FALSE!!!) to cover a second cookie.

Wait, how’d the bag get empty? I ATE THE WHOLE BAG?!? How did that happen?

Maybe you resisted the first cookie. But can you do it again tomorrow (or in another hour)?

Trying to Change at Work

Now, let’s look at trying to do something different at work. Perhaps you’ve been given a “development plan” by your boss. (Duhn Duhn Duuuuuuuuhn!) But you’re getting up at roughly the same time every day, putting on similar clothes, driving the same route, parking in the same parking lot, going into the same building by the same entrance, usually in the same mood, seeing the same people, then sitting at the same desk that’s laid out the same for all situations to begin doing the same work…

With all the conditioning associated with all that sameness, what do you think your chances are to change unless something massively traumatic has already occurred? And even then, might not the trauma create such a negative association that you’re even less likely to make a positive change?

Thankfully we still have free will. When we know we want to change something, we have to control our stimuli. We change our environment (this includes clothing, personal items, even our posture, as well as place) to give us new “neutral stimuli” to condition responses of our choosing. There will always be enough of the original stimuli to let us transfer the behavior.

This Sounds Complicated, But It’s Easy

This is really, really easy to do. I know some people don’t like the term “hacks” when applied to life, but I use it in the more original, computer-oriented sense: Use your brain’s natural programming to consciously work for you with less effort. You’re essentially creating a smaller amount of “code” to “hijack” what the larger, overall programming was trying to do.

In other words, it’s not a shortcut, but you’re also not starting from scratch. If something is too difficult to make happen, it’s going to be impossible to stick with in the face of more tangible priorities.

The steps are as follows, but shouldn’t really require this much though:

Let’s go back to the diet, and then the workplace again.

If you’re on a diet, the first rule is don’t have items you can’t eat in your house. If you’re upset or celebrating or just needing a snack, you can’t eat the cookie you don’t have. Rule number two is to have food that you enjoy well enough but that is healthy. I may have exaggerated with broccoli, but if that’s all you have, you’ll be snacking on broccoli.

You changed the circumstance you are in when you are hungry.

That’s a system. At a time when you didn’t need or want a cookie, you made sure there were none in the house. Notice, you exerted your free will when you weren’t competing with your behavioral responses. Now, when stimulated for a cookie, you don’t have a cookie to grab.

But what about buying the cookies in the first place? Most people are happy to buy cookies thinking, “I won’t eat them except in special circumstances,” or, “These are only for my kids.” (Way to go, teaching them to also reach for cookies! *#judgement* *#imahypocrite*) Well, here’s another place you need a system. A) Don’t shop while hungry. B) Make a shopping when not hungry. C) Don’t buy anything that isn’t on the shopping list.

First, don’t decide what to say in the meeting in the same place you usually make that decision. Change the circumstance. Perhaps you can go sit in a conference room or a coffee shop or a particular chair at home to make that decision.

Also, decide who you’ll be during this meeting. I don’t mean be fake. This is more like knowing when to be stern versus sweet with your children. You’re not fake in either case, but you’re a different you. Do you need to be a mentor, a professor, a close friend, a bad cop, a objective third party? Can you refer to that you with a semi-secret personal name? This creates a new psychological circumstance.

We’ve already created some new associations. Let’s keep going. Decide, from this neutrally-stimulating location, on how you’ll present the feedback. Would the mentor do it this way or that way? In addition, decide where you’ll do it. Will it be at your desk? At their desk? In a conference room? Over lunch? If possible, do it in a completely new space than you’ve given feedback before. If that’s not possible, before the meeting can you rearrange the space to create a “new” environment (and then put it back afterwards)?

Then, even if the results weren’t dramatic–even if you barely noticed them–as long as there was some positive change, repeat what you did the next time you have this kind of meeting. That will create a deeper association with the new stimuli and cement the new, “conditioned”, behavior.

I think that says it all.

Any questions on this? I’d love to hear them in the comments. I want to make sure I’m clear with this.